Oh my darling, sometimes it’s hard to be tall. I know that. You’re only 2 and yet everybody expects so much of you. It’s not their fault. They think you’re older; 3… maybe even 4.

Today, I felt my heart breaking a little as I saw you trying to fit in our new toddler group.

I saw the mum who glared at you as you collided with her little girl. I heard her moaning to her friend about “that child” who was charging around without looking where she was going. But that’s what 2 year olds do. It’s because you’re tall. They think you’re old enough to know better.

I know it was an accident. 2 year olds can’t predict when and where moving objects will cross their path – they just focus on their destination and run. And more than that, you struggle to stop yourself once you have momentum on your side, and your reaction times are still slow.

You’re only young, after all.

Don’t worry my precious darling. You’ll get there. I am not worried.

The leaders asked you questions that no 2 year old would be able to answer. They wanted to know where you live and when your birthday was. I would never expect you to answer that. It’s knowledge beyond your years.

It’s okay. They were only trying to be friendly. It’s just that, because you’re tall, they thought you were older. They assumed you’d be able to answer. I’m sure they thought they were helping you to settle in. But I saw the panic in your eyes. You didn’t know how to respond. You cowered behind me to hide from their gaze.

You’re doing just fine. You’re a bright, inquisitive little girl. Those people expect too much of you. They’re not doing it on purpose. You’re right where you’re supposed to be. 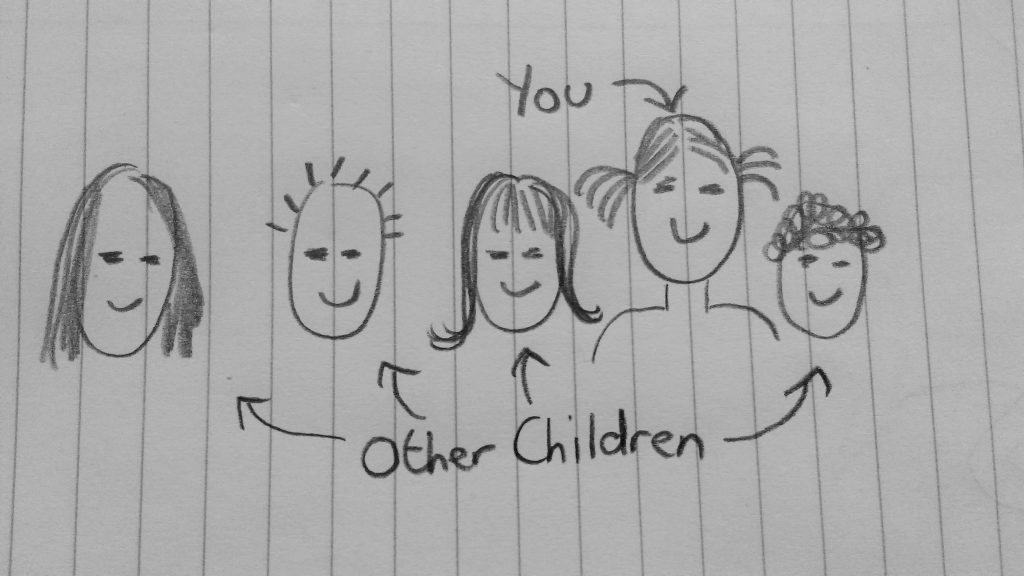 And yet, at the same time, I’m struggling with it. I don’t blame you at all, but we seem to getting ourselves a reputation.

I know you’re not rough – you’re a kind-hearted, happy little girl, who is brilliant at taking turns and sharing. But, like every 2 year old, you have lapses of self-discipline every so often. Sometimes the desire to go on the slide becomes too strong and you run to the front of the queue. That’s normal. But because you’re so much bigger than the other children, you accidentally knock them over with your enthusiasm.

Of course I always step in and gently lead you back to your place in the line… but I can hear the other parents chuntering. I know that they wouldn’t be as judgemental if you were smaller. They’d probably smile and maybe even shoot me a reassuring nod.

But as it is, we’re frowned on. They watch us like a hawk, thinking you’re going to lash out at their precious baby. I know you would never do that – you have such a gentle, loving nature. Don’t worry, my darling. They don’t know any better. They are judging you on your height, and, as we keep saying, you’re tall.

It’s hard for you.

All you need is a calm reminder about what is expected. You’re not an aggressive child at all. A quick word and you will hand back the toy you took, or return to your place in the queue. You never defy me or tantrum when I ask you to share. But these people don’t see that.

They only see the “big kid” who’s throwing her weight around; the 4 year old who pinches toys off the babies and always wants her turn first.