Did you know that 63% of grandparents with grandchildren under 16 help out with childcare?!

We’re currently on holiday at my in-law’s house. Our children LOVE visiting their grandma and grandpa – it’s always a chilled-out, meandering, rustic, back to nature sort of holiday, punctuated with feeding the chickens, donning a bee suit to collect honey, and pond-dipping. It’s a far cry from our chaotic, busy lives back home!

Grandparents Have Ambitions Too

All that being said, our kids’ grandparents certainly aren’t sitting back from life. Far from it, in fact. They’ve grabbed this new child-free period of life with both hands – they’re reaching for dreams that they’ve previously been unable to fulfil due to 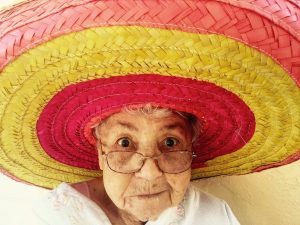 childcare demands. My mother-in-law now has her own flourishing arts business. My father-in-law has gone back to university to do a master’s degree. After a lifetime dedicated to successful careers and the duties of family life, they now have the opportunity to pursue their hobbies.

Grandparent Day-Care Has Become The Norm

We live a long way from both sets of grandparents. I can’t tell you the number of times I have bitterly resented that fact, as I see other young families sharing childcare responsibilities with their parents and wider family.

We have raised our children alone.

As I sit here, though, sipping my diet coke and peering into my mother-in-law’s pottery studio, I can’t help but think “Good on them!” Somewhere along the line, it has become expected that grandparents will become the day-care service for working parents. But why should they?! They’ve worked hard to raise their own children, making sacrifices for them to give them the best start in life, then they snatch a few short child-free years, before suddenly then being expected to give up everything for their children’s children as well. No way!

Give Grandparents A Break

Let’s stop being so selfish as a generation, and let’s give our parents our blessing in doing something for themselves for a change! They will always love their grandchildren, and their help is greatly appreciated, but maybe we shouldn’t expect it on-tap 24-7!

A few people have commented to say that this has come across as quite a judgemental post and that grandparents WANT to help out. I just wanted to say that I totally agree – grandparents do a fantastic job! And their willingness to help out is a life-line for a lot of families. What I was trying to get at with this post is that what they do is a huge favour and so they should be able to pick and choose how much they do and when, rather than having it dictated to them by us. I hope that makes it clearer.