I have always loved Wimbledon. As a child, it was the one time of the year that Blue Peter, Fun House, and Art Attack gave way to something my mum wanted to watch. The TV was so small and grainy that we couldn’t even read the score!

And yet, I loved it!

As a teenager, tennis became my way to unwind. Every Sunday afternoon, come rain or shine, a bunch of us headed to the park where we play on the cracked, tarmacked courts until it was time to come home.

This year, hubby and I settled down on the settee to watch Wimbledon, as we always do (in the evening on I-player because, you know – children!). Four days into the tournament, this little message landed in my twitter DMs:

Yup we had just won tickets to the Ladies’ Final at Wimbledon in 9 days’ time, courtesy of Robinsons (the drinks people).

Honest Mum is one of my dearest blogging friends (and the only blogger I have actually met in real life!). But she’s also MASSIVE in the blogging world and thousands of people read her blog every day!

I NEVER expected to win!

I literally jumped up from my blog desk (a.k.a. my bed where I sit when toddler naps!) and ran downstairs to tell hubby the amazing news.

The next few minutes were spent busily sorting the logisitics of it all – train tickets, childcare, timings. We live “up North” in Yorkshire and so I’d only been to London twice before. But, by hook or by crook, we were getting there!

Saturday morning, 5:40am – hubby and I boarded the train to King’s Cross, London. Our adventure had begun…!

We used the tube (London Underground) to make it across the city. Due to cheaper train fares, we had arrived in London a little earlier than we needed to, so hubby had arranged a little detour for us – a trip to Buckingham Palace! I’d never been before. It really is amazing and seeing it made my little heart proud to be British. 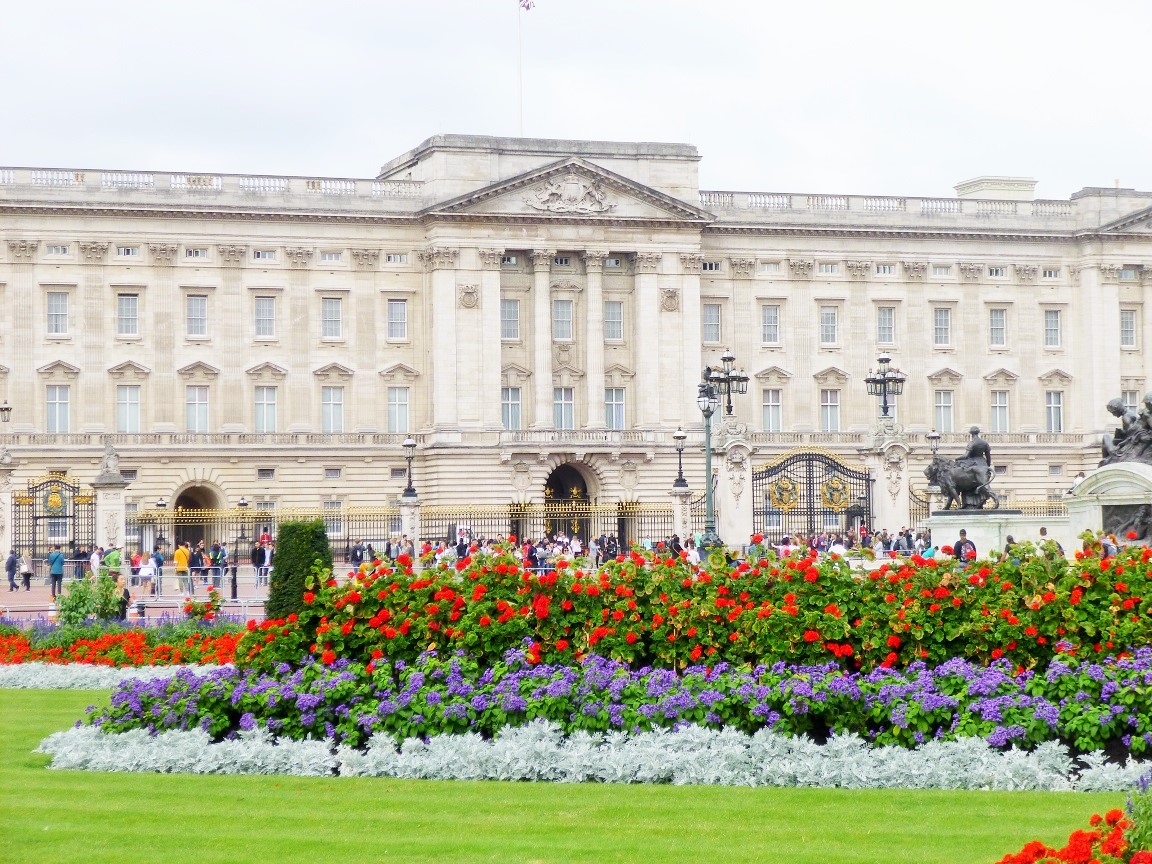 We had half an hour admiring the views, and then set off for the famous tennis grounds.

Arriving at the station, there were people everywhere, and the air hummed with excitement. The walk from the tube station to Wimbledon was a good 15 minutes but there were hundreds of people heading that way and so we just followed the crowds.

We giggled a little to ourselves as we passed the start of the queue for those who didn’t have tickets. Was this really happening to us?? Were we really ticket holders?? I won’t lie – there were several times on the lead-up that I’d wondered if this was some big scam – things like this don’t happen to people like us!

But it wasn’t a scam – it was real! We rocked up to the entrance, reported our names to the ticket office and two ground passes were handed over.

A quick bag-check by security, and we were in!

I have to admit to being a little overwhelmed by it all. There was a band playing movie themes and the sight of something familiar (as a flautist, I’ve been playing in bands for years) calmed my nerves.

We set off in search of Henman Hill. It didn’t disappoint. Already people were marking their territory and bagging their spot on the grass (with 3.5hrs to go until the final started). 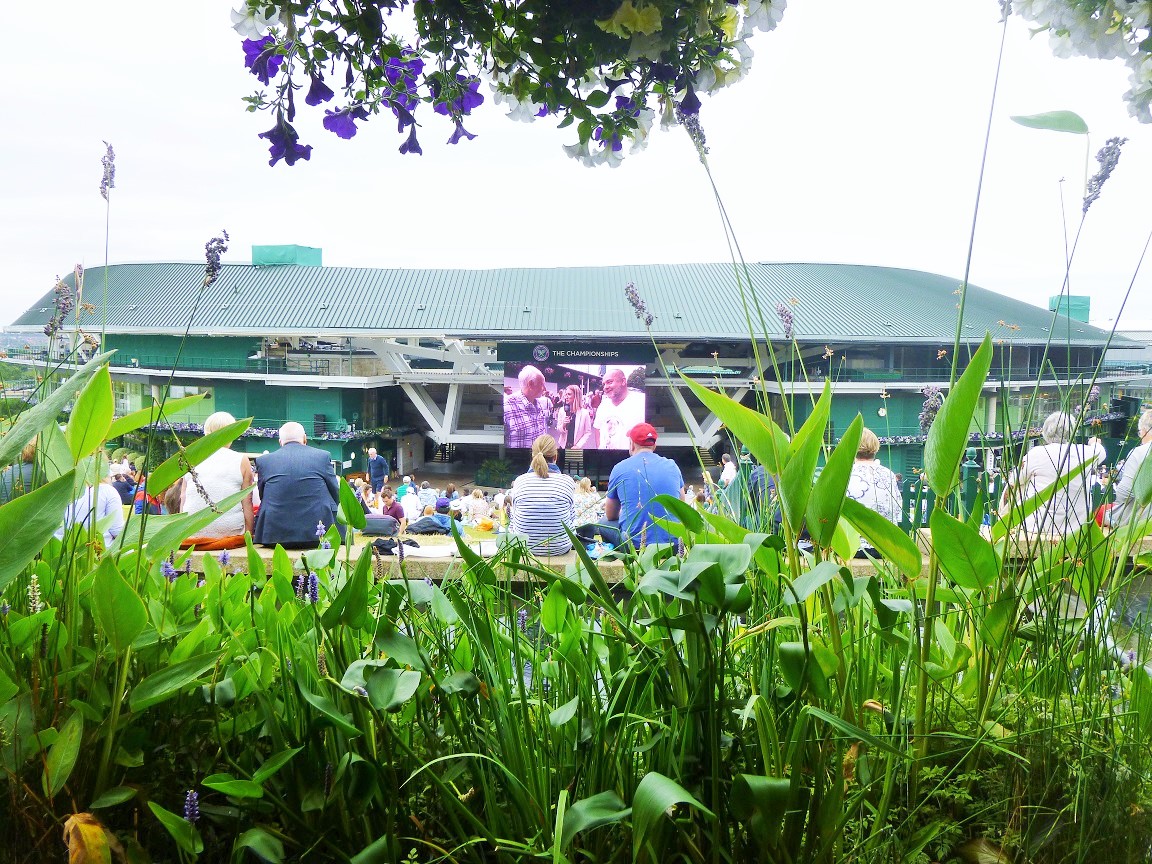 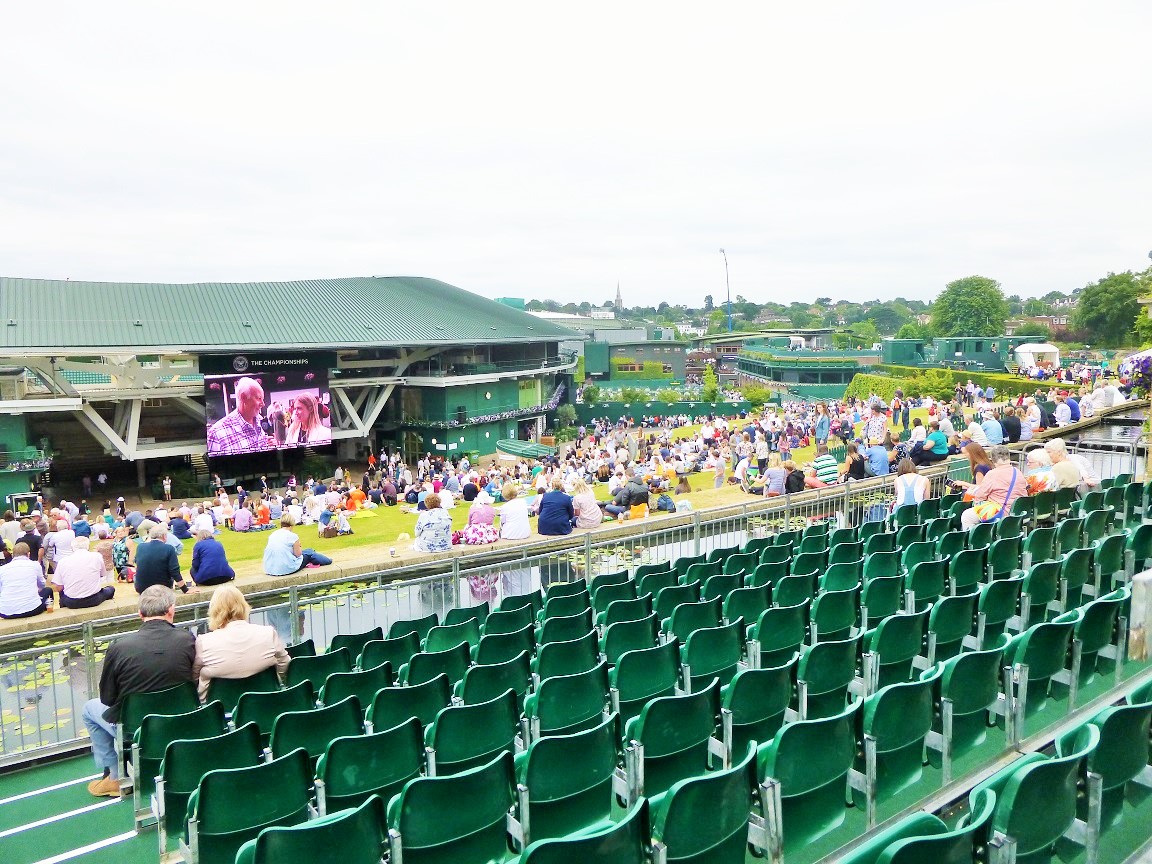 Hubby and I had fun re-enacting the camera shot that the BBC seem so fond of these days – panning up from Henman Hill and round towards the scaffolding tower where Clare Balding would be sat analysing the days’ matches.

We made our way around the grounds, drinking it all in. The walls, pillars, walkways and entrances are draped with purple and white flowers. It really is beautiful. Everything is in pristine condition and there are big green boards dotted around with interesting stats about the tournament and the players. 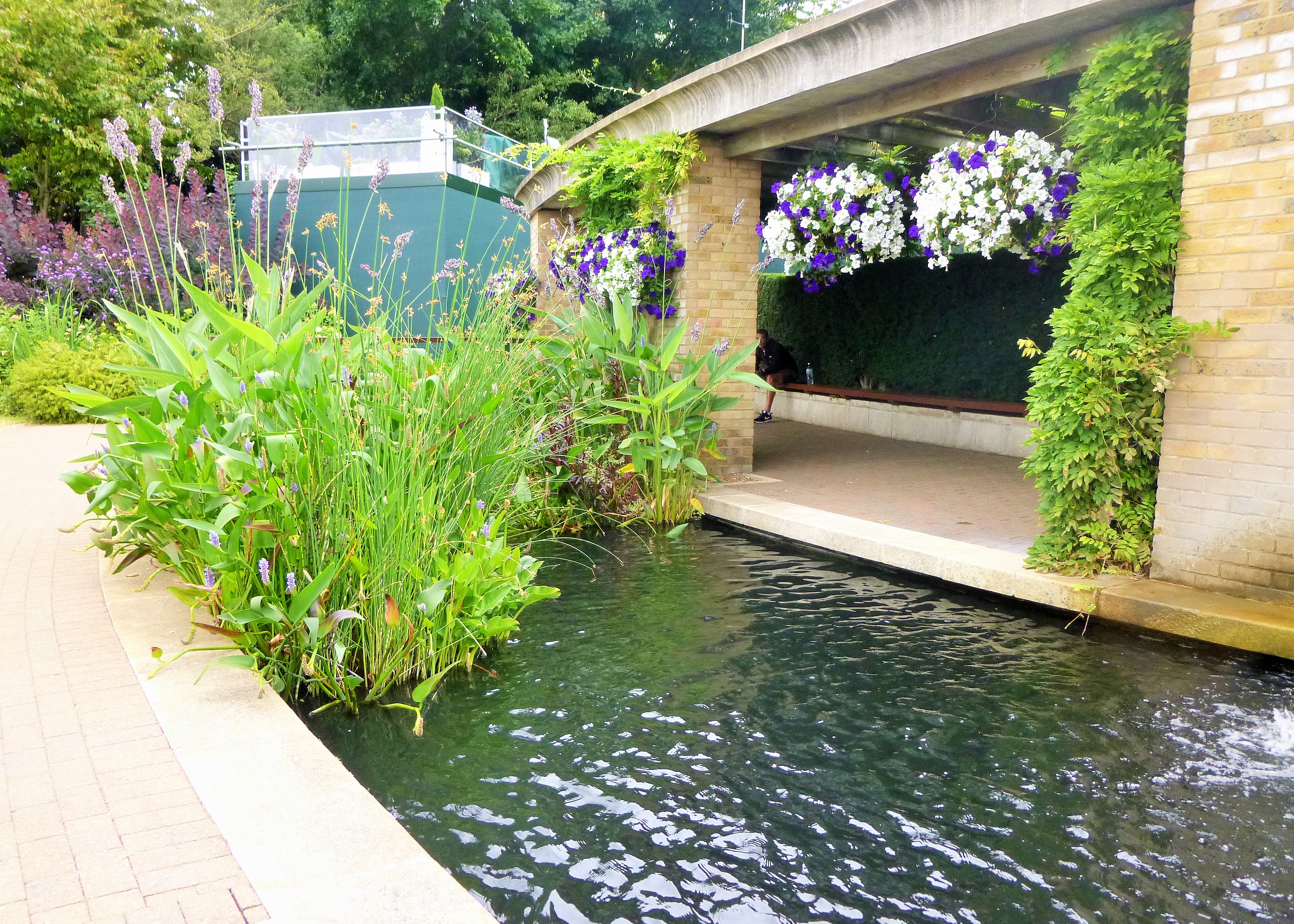 At 11:30am, our day at the Robinsons Suite began. It is located on the 3rd floor of Centre Court so we headed up the stairwell for our welcome drinks. Except it wasn’t just welcome drinks – it was as many drinks as we wanted for the rest of the day! There was Pimm’s, Champagne, Diet Coke, Robinsons Refresh’d (obvs!) – pretty much anything we wanted. And as much as we wanted! 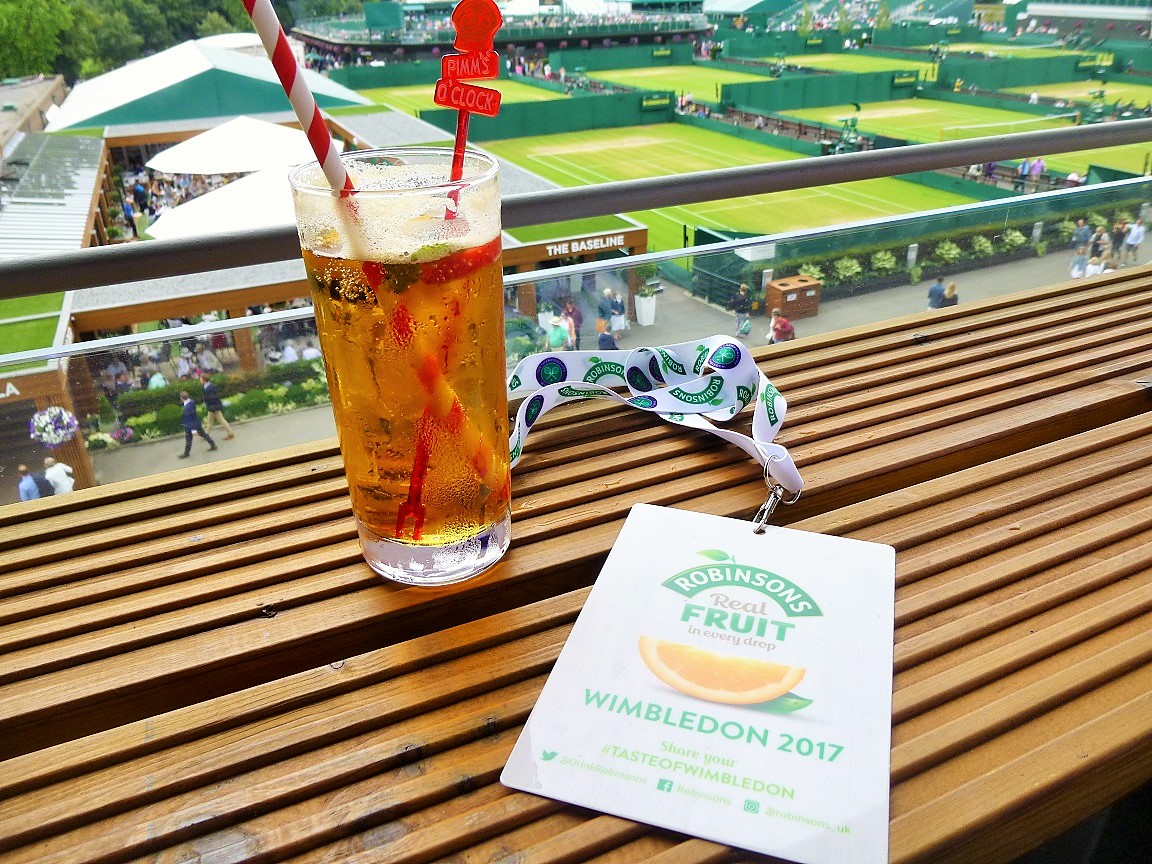 The Robinsons Suite has a terrace that looks out over the entrance to Wimbledon, Gate 5, as well as the smaller courts. The weather was grey but dry and we sat on bar stools watching the people scurrying about their business beneath us. 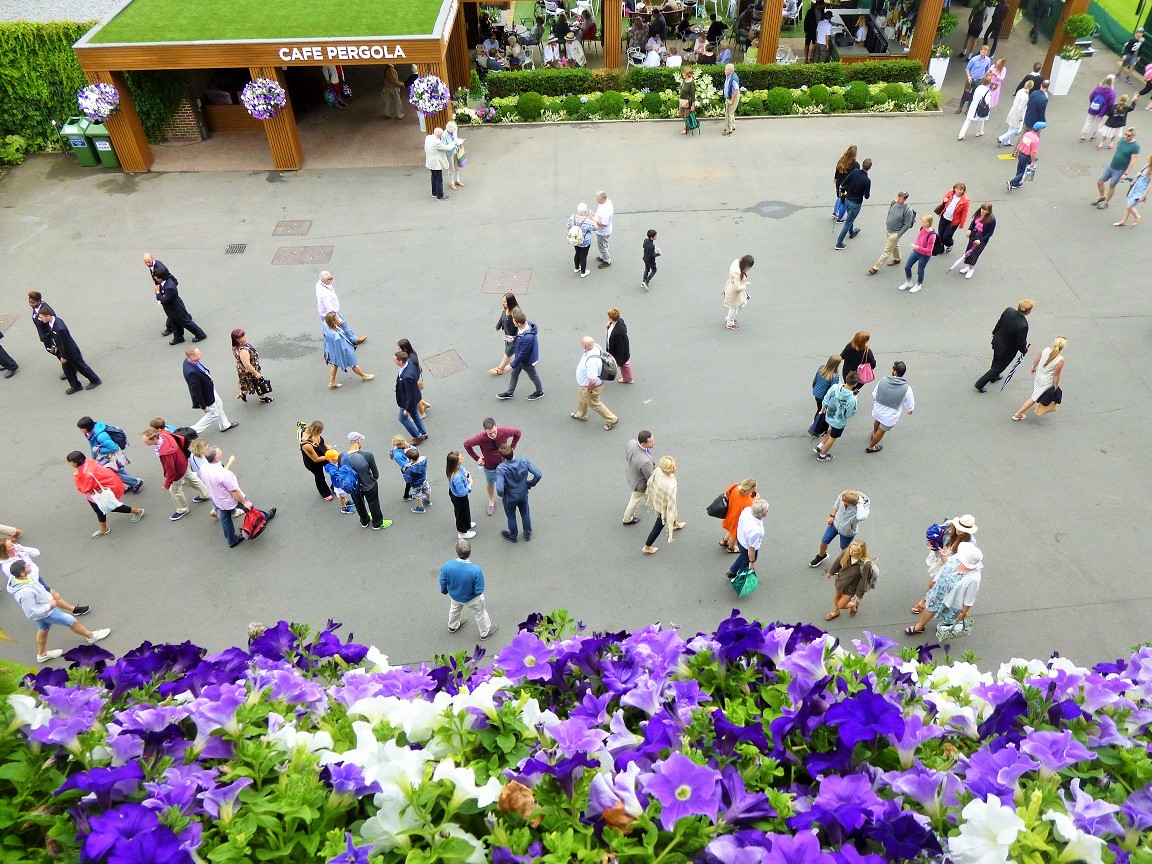 It was at this point that Tim Henman arrived!!! He had come to meet us and the other competition winners. I’m not really one for celebrities but I actually thought that I might explode when he appeared at the entrance!

Unfortunately, the people next to us grabbed him and started chatting eagerly. We decided to wait until they’d finished but then he headed the other way. Nooo! We missed him. I was gutted. So Tim, if you’re reading this, you owe me a chat and a photo! Haha.

Then it was lunchtime. There was a table plan and we were sat with 3 other couples who were all lovely. A big chunk of time was spent discussing what a lovely bloke Tim Henman is (yup everyone else had chatted to him apart from us!) and also how we’d all managed to bag this incredible Wimbledon experience.

As we were eating our meal, the rains started to sweep in and we heard that play had stopped on the outer courts. We were very glad that the roof on Centre Court meant that the highly-anticipated V. Williams-G. Muguruza match would not be postponed.

We came out of the suite, turned left and almost fell out onto Centre Court, we were so close!

The place was huge – far bigger than it ever looks on TV! – and it was already packed as we arrived only seconds before the players did. Everyone was chattering excitedly and the atmosphere was electric. 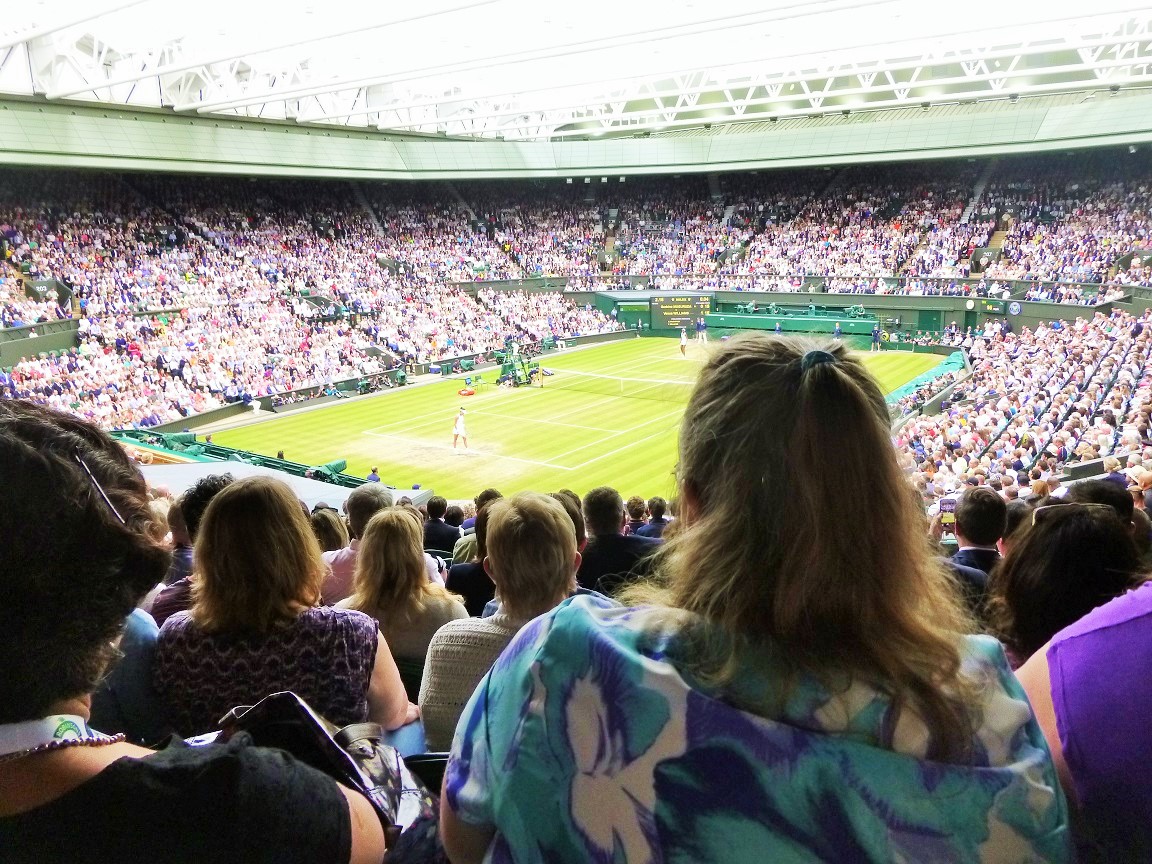 We were sat just behind the players’ box, with a perfect view of that famous Wimbledon turf!

The match passed in a bit of a blur. I have to admit to being a little lost without the commentary and the constant update of the score (I never realised how much I depended on it). But it was brilliant to be there and be a part of it. 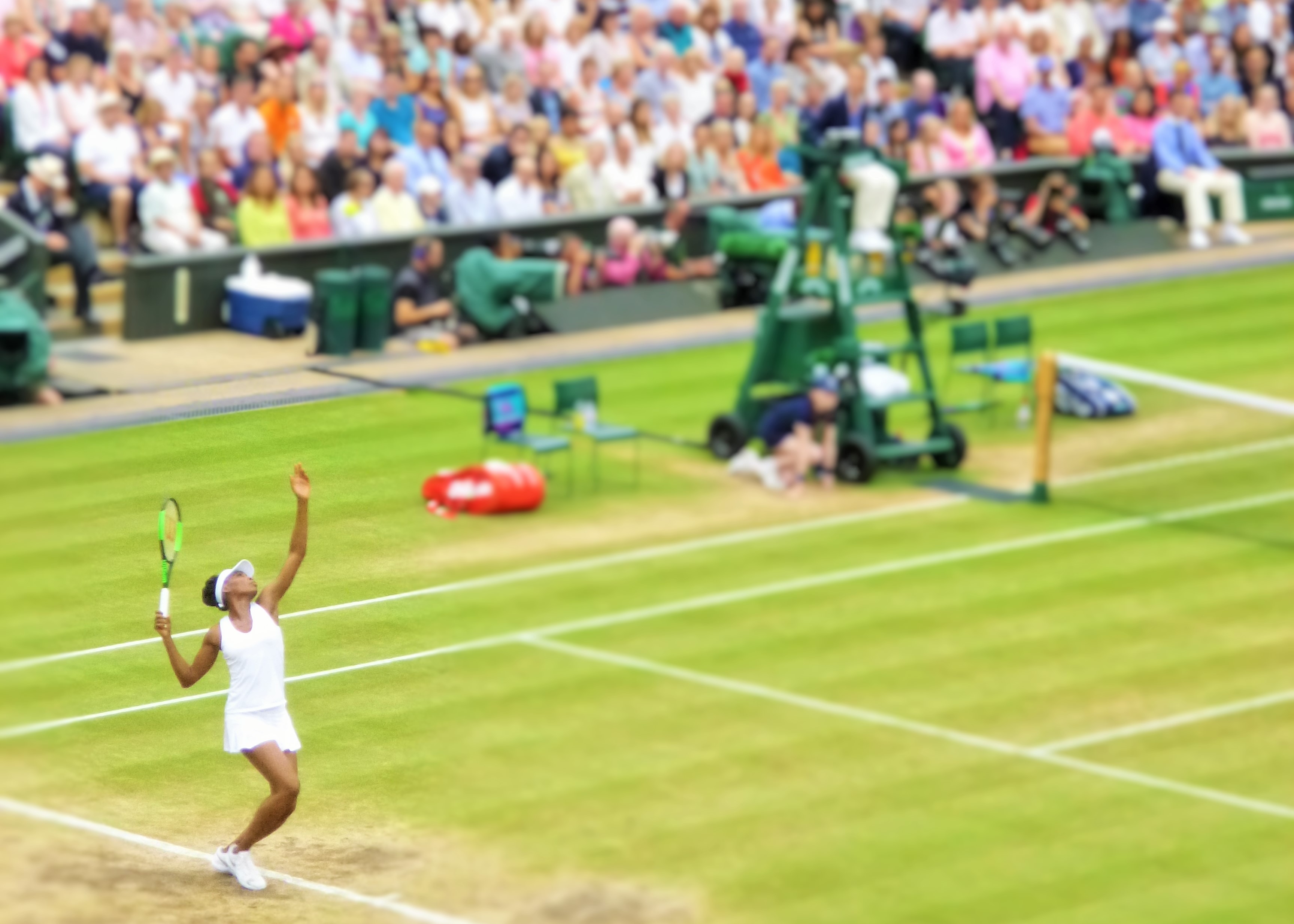 The power that Venus Williams managed to get behind the ball was amazing. You could audibly hear the ball picking up pace as it sprang from her racket. I thought Venus would win.

But then she seemed to fall apart and Murguruza upped her game and won the final set 6-0. It was a little disappointing that the match was over so quickly but that’s the way it happens sometimes. 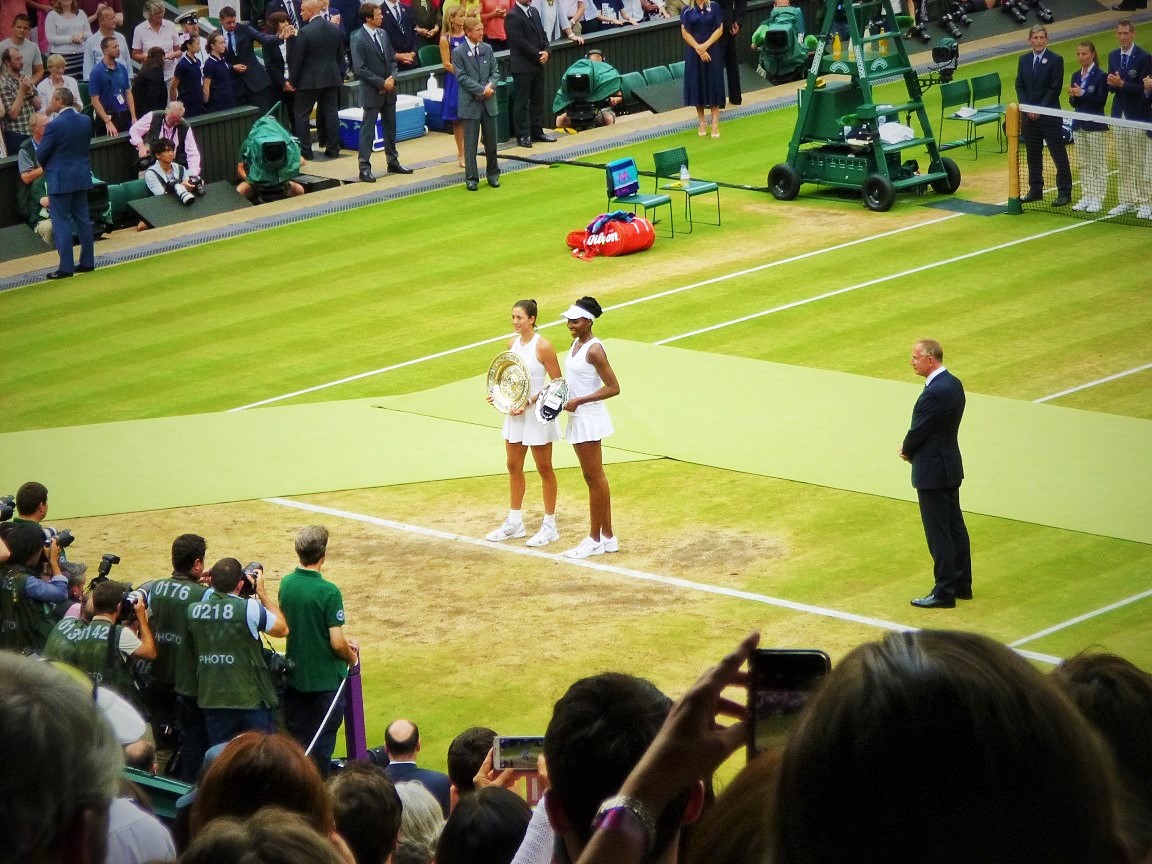 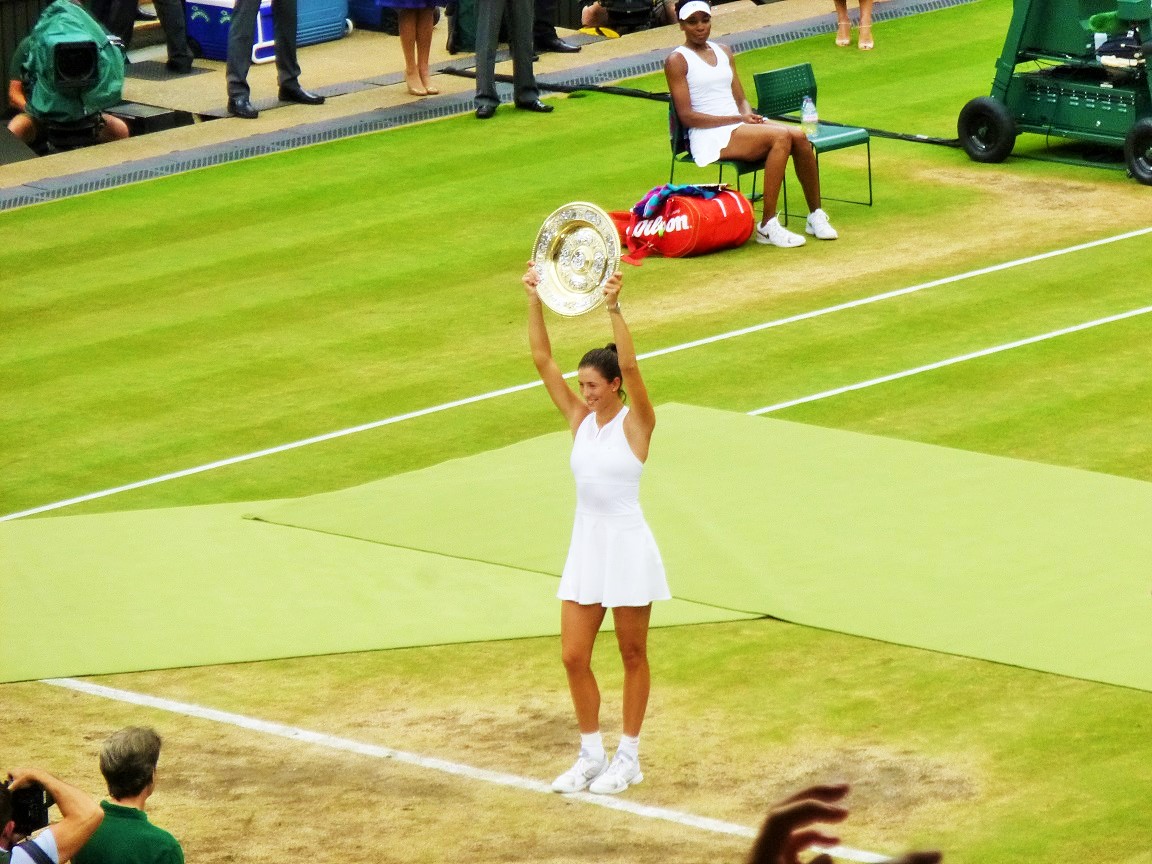 Once the match ended, we headed back to the suite for afternoon tea. That was delicious. Everything was beautiful (even the battenberg was purple-and-green-check to match the Wimbledon colours). 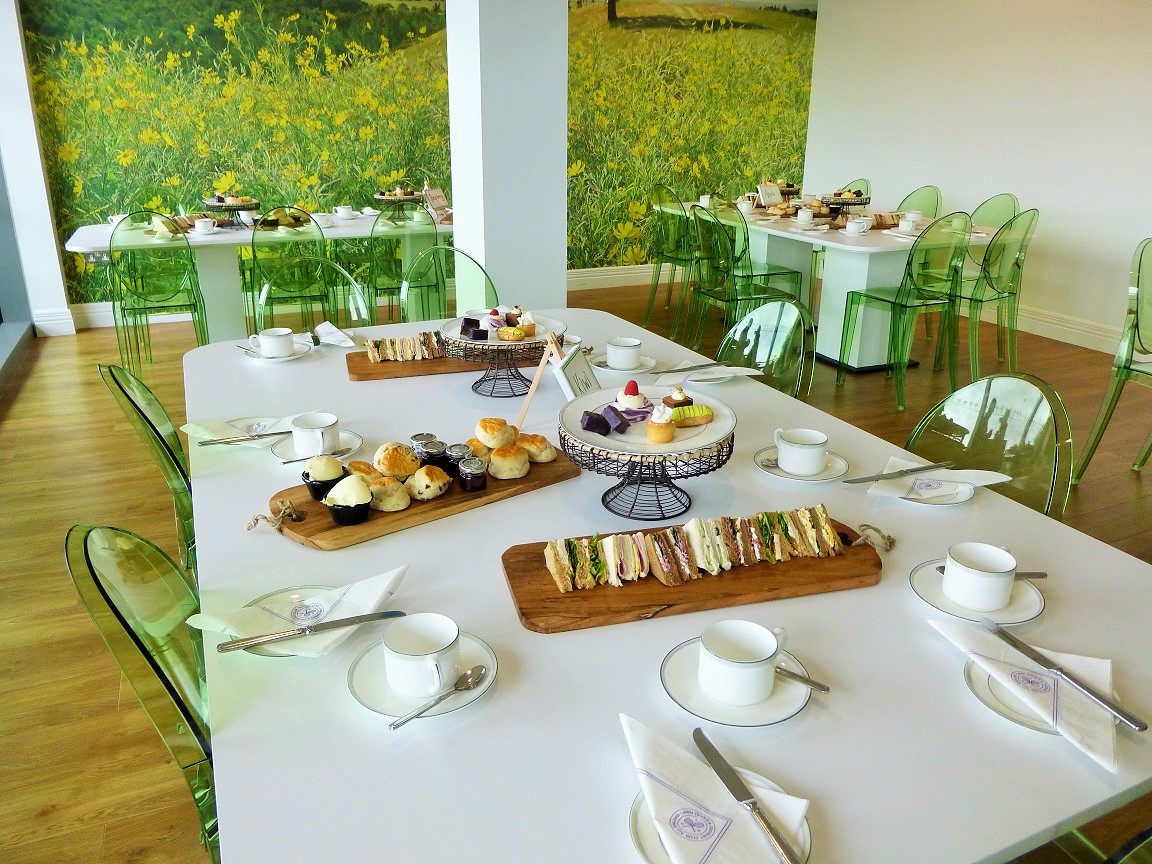 Time was running out as we had to leave to catch the train home at 6:00pm. So we nipped down to the Wimbledon shop (because souvenirs are a must when you’re having a once-in-a-lifetime opportunity!).

Then we headed back to centre court to watch the Men’s Doubles Final for the last hour of our visit.

It was hard tearing ourselves away (particularly as the Mens’ Doubles was a brilliant match!) but it was time to get home to our little girlies. 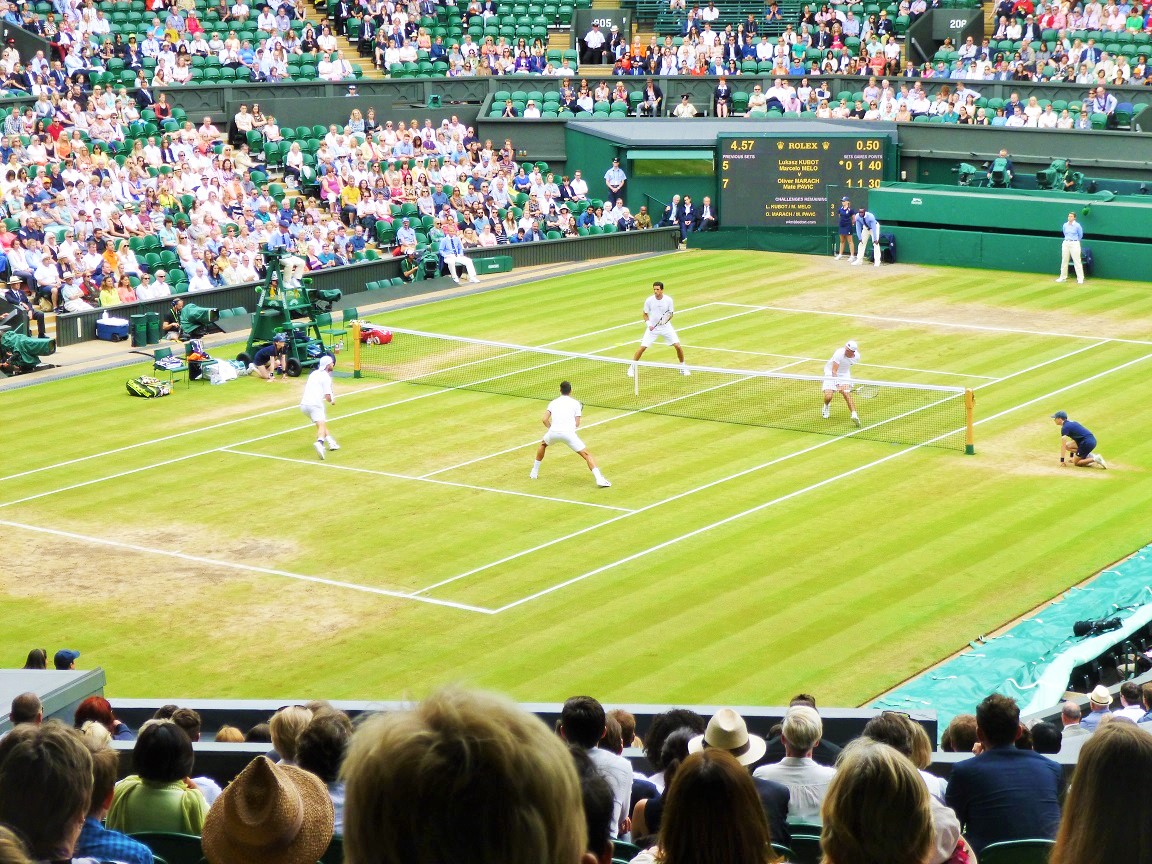 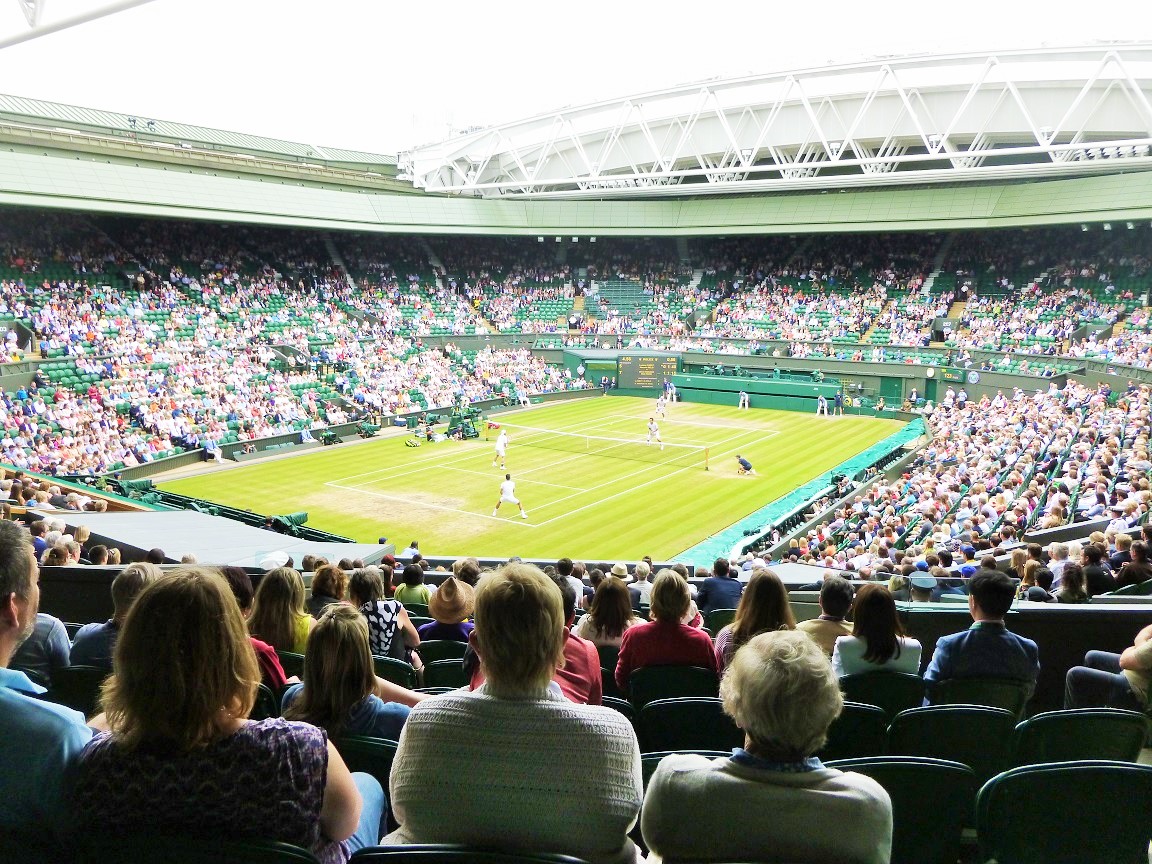 We need to say a big thank you to our parents, the players, the people at Robinsons, Honest Mum, and of course everyone at Wimbledon. We had a brilliant day; one that will stay with us both forever.

If you’ve got powerful, fearless girl of your own, why not check out our new Lucy At Home t-shirt shop. We’ve got lots of designs like this cute Pretty Fearless tee. Plus, if you buy before the end of July, you can have 10% off using this discount code: 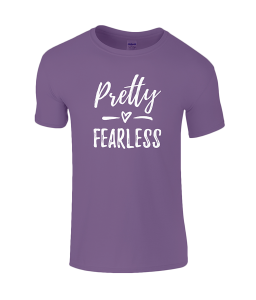