This is the story of the birth of my second daughter…except it’s not really! It’s the story of a delicate, timid mummy who discovered that she can actually be a fearless pillar of strength and courage…

I don’t ‘do’ pain! It hurts! I am reserved. I am low in confidence. I am anxious.

My birth plan (what a joke!) had just 2 stipulations:

I started having pains at breakfast on Tuesday morning. It wasn’t too bad and I did the usual school run and housework, but as the frequency increased, I knew I needed to put a childcare plan into action for daughter Numero Uno.

As teatime rolled around (‘dinner’ for all you southeners!), the pain started to hit and I got my Tens Machine set up. It was great! I don’t know if it was just a distraction from what was really going on but I was glad to have something else to think about.

I paced the lounge floor for a few hours and made sure I stood up for every contraction (a bit of extra help from gravity and all that!). We eventually went to the hospital at 9.30pm. By that stage, I was in a lot of pain and groaning (screaming) with each contraction. The midwife examined me and…just 2cm dilated. What?? Are you actually kidding me??!

I was furious! I was crestfallen!

The midwife wouldn’t even let me have the gas and air because she said the baby wouldn’t be coming for hours and breathing the entonox for that long would wear me out. I felt foolish. I felt weak. I felt incompetent. I felt like I was losing control. I started to slide into a panic attack (a prominent feature during my previous birth). My body started to twitch, my throat began to close up, and a strange melting sensation was happening at the base of my skull.

At that moment, I had two options – drown in the suffocating torrent of fear, or grab onto calm with both hands and cling to it like my life depended on it. I chose the latter.

I stood in the room, bowed my head and listened to my mouth slowly, deliberately 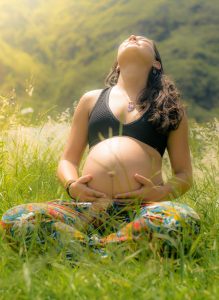 I didn’t allow myself the indulgence of the slightest whimper – that would have been a chink in the armour – no, I needed to remain in complete control.

The pain was immense.

The midwife had said she would assess me again in a hour but by the time it rolled around, I couldn’t get on the bed – the contractions were already seamlessly consuming my body. I remained glued to my spot, fiercely determined to ride this out, after all, there were still hours to go!

We finally managed to persuade the midwife to start the water going on the birthing pool (it takes about 30min to fill!) but as the last few drops splashed from the taps, I yelled out, “I need to push”. As I felt the words burst from my lips, shattering the silence, I felt embarrassed – how could it possibly be time to push? We’d only been in the hospital an hour and a half and my waters hadn’t even broken yet!

The midwife muttered something about seeing how I was once I was in the pool and I got in. As my heaving, tensing body sank into the water, I felt instantly soothed. It was amazing!

However, the moment was short-lived because with the very next contraction, baby’s head was out, soon to be followed by the rest of her! Just like that! Without even a sniff of gas and air! I hadn’t even moved my Tens Machine onto the 3rd setting yet because I had wanted to pace myself!

How did that happen? Did I REALLY just do that? I gave birth without ANY pain relief! ME??! Granted it wasn’t by choice, but I had done it none-the-less, and with an admirable degree of dignity and composure, given the circumstances!

So really a woman who can do that has no excuse for being worried about meeting a room full of people for the first time, or sharing her ideas about the future of the local mums and tots group! That’s my little confidence-booster right there! As I’m walking to my next daunting challenge (and in all honesty, I find a lot of life quite daunting!), I remind myself of what I did!

“You walk in there with confidence. You are strong,” I whisper to my clenched fists and pounding heart. I reach for the calm that I somehow managed to conjure in that poky hospital room, I pull back my shoulders, and I march in!