“Love thy neighbour” – a fairly well-known phrase in the modern world, and a direct quote from the bible.

Now I’m not really one for politics. I always make a point of voting but I don’t avidly watch the debates or anything. But I am going to throw my two-pennies-worth in about the EU Referendum.
As far as I can see, people are having the wrong debate!

In terms of the economy, nobody really knows what will happen if we leave. We might be better off. We might not. The exit campaign say we pay millions of pounds in membership fees but get little in return. The remain campaign say that being part of the EU makes trading with other EU nations much easier, thus boosting the economy. The figures can be interpreted in lots of different ways. If it really was as clear-cut as people are claiming, there wouldn’t BE two sides. So, taking a completely objective approach, there is no definitive, obvious answer from the economics camp.
But, as this article in the telegraph states, “The ability to control our borders stands at the heart of the debate on whether or not Britain should leave the European Union.” This is because one of the founding principles of the EU is the idea of ‘free movement’, meaning people from EU countries can live in other EU countries without needing a visa. Britain, being one of the strongest economies in the EU, attracts a lot of migrants.

Anyway, I’m getting bogged down! What I really want to say is that all these arguments and debates are about trying to get as much as we can OUT of the EU with the minimum amount of INPUT. I think the morals of this are dubious, to say the least. It’s certainly not a principle that I will be instilling in MY children. I want them to be compassionate on those less fortunate. I want them to see a need and strive to fulfil it. I want them to love their neighbour.
There was a meme doing the rounds on Facebook recently that pretty much sums my sentiments up (sorry I don’t know who originally said it): 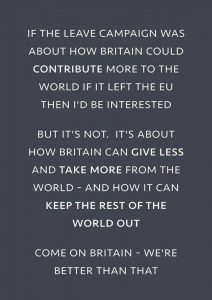 Do you remember the story of The Good Samaritan? It’s about a man from Samaria finding a man from Jericho in the middle of nowhere, half dead. Even though these men are from two different countries (countries that hated each other, I might add!), the Samaritan stops, tends to the man’s wounds, takes him to an inn, and pays for him to stay there! THAT’s the sort of person I want to be! And the phrase ‘love your neighbour’ comes from that very story.
Britain is a wealthy country. Yes there is poverty here (I know that first hand!), but in worldwide terms, we are immensely rich! I think it is only right and proper that we put in a bit extra to subsidise the poorer EU countries. If you think about our own welfare system, the richer individuals pay a higher rate of tax (in theory!) than those who are poorer. Well isn’t the EU just the same principle on a larger scale?
Yes we have a responsibility to take care of our own people, but when this manifests itself as a Superiority Complex over other nations, and a refusal to help innocent refugees, well then I am ashamed to be British! Did you know that, according to Amnesty International, a large majority (86%) of refugees are being hosted by developing countries because the richer countries, like ourselves, are closing our borders.
The EU is designed to offer opportunities and stability to ALL it’s member states, regardless of wealth, regardless of nationality. That is ‘loving your neighbour’ in action. That is something good, something precious! And I am all for it!
As a general round up of what’s going on, this article on the BBC website is quite helpful.